My wife and I have been to Japan on two occasions. The first time was in Spring 2017 to see the famous cherry blossoms and then in Autumn 2018 to enjoy the foliage. The first visit was with a group of our family and relatives but the second visit was only the two of us. Each has its own advantages. Travelling in a group makes the cost more efficient because you can share the accommodation expense, which can be quite expensive in Japan. Travelling only the two of us makes it simpler to decide where to go. I will start sharing our favourite places that we have been to in Japan. The first would be Naruko Gorge.

Naruko Gorge offers a stunning view during Autumn, and this was one of the reasons why I picked this place for us to visit. It is located in North-Western of Miyagi Prefecture, quite a distance from Tokyo and my google map timeline indicated that we travelled around 350 km from Tokyo to Naruko Gorge. The route was relatively straightforward;

We left our accommodation quite early, by 6.20 AM we were on board of the half an hour train to Tokyo Station and then off to catch a Shinkansen to Sendai. Shinkansen cars are divided into two categories; reserved and non-reserved cars. The last time we travelled from  Osaka to Tokyo, we opted for the reserved seat car. Although this assured us the seats on the train, we were then unlucky because the car was packed with all the tourists and the overhead compartment was filled up with luggage already.  We ended up stuffing our big bags in front of our legs, not fun at all if you were taking a long journey. Something that I don’t enjoy at all is that foreigners like to talk a lot and out loud even on the train. So the car was noisy with people chatting oblivious that there were people around. This was so in contrast with the locals. Everyone tried to keep their voices low on the train, including on a Shinkansen train.  Learning this unpleasant experience in the past, we chose to get on a non-reserved car. You would find people travelling for business mostly, and they don’t have big luggage with them and for sure, low noise most of the time. 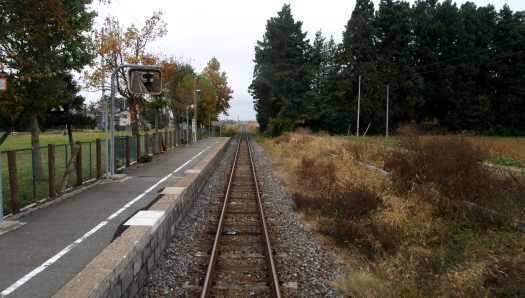 The trip from Tokyo to Sendai took about one and a half-hour. We stopped briefly at Sendai Station before getting on to another Shinkansen to Furukawa that only took us for 11 minutes. From Furukawa, we rode a local two-car train for about 50 minutes to Naruko Onsen station. The trip to Naruko Onsen was magnificent. The train moved steadily although not as fast as other trains we had been to in Japan, and along the way, you could see rural villages with grass and tree leaves starting to turn brown. It was stunning, an excellent decision to get away from Tokyo metropolitan. 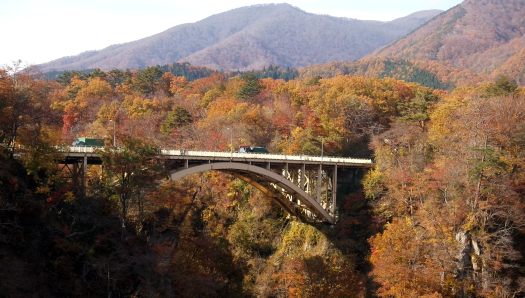 It was already 12.30 PM when we got there. We headed straight to Narukokyo Resthouse and enjoyed the autumn foliage while eating onigiri for our lunch. You could actually walk down from the rest house to the river, but I wasn’t sure how long it would take, and I was worried that it would be too late in the afternoon before we head back to Naruko Onsen station. 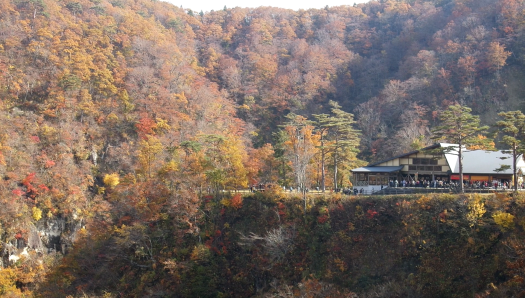 We had two options to go back to the station. We could get on the same bus or walk to the station, which was about four kilometres away. I was hesitant to walk because we didn’t know the route, but my wife was feeling adventurous and opted for walking back to the station. This was proven to be the best highlight of our trip that day. The scenery was stunning. We actually enjoyed our walk so much more than the view at the gorge. We would encourage you to take this route back to the station instead of getting on a bus if you still have plenty of time. These are the views as we walked back to Naruko Onsen station. 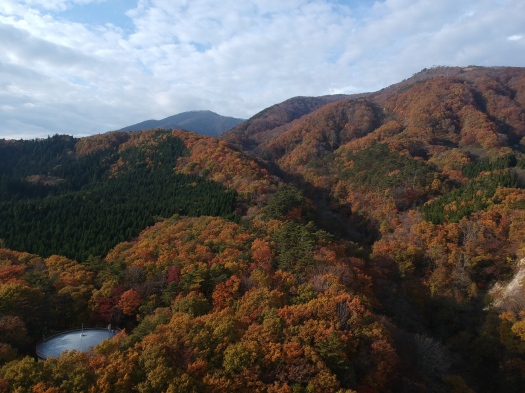 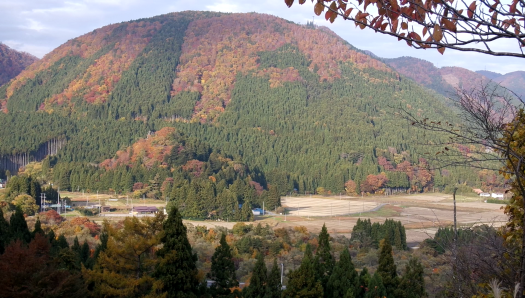 Passing by this waterfall, our feet felt so heavy that we were dragging our feet. The sun was setting, and it was getting dark and quite brisk. We could see Naruko Onsen town, yet it seemed so far. As we were walking along the freeway, we saw somebody walking ahead of us. I said to my wife, “Maybe he was heading toward the station too, let’s haste and follow him!”

We just followed him even though he took a right turn down to dirt walking path away from the freeway. We were so tired and gave up on following him as the trail was ascending quite steep again, but the funny thing was he stopped at the top of the hill and waited for us. It seemed he knew that we were a bit lost. He then maintained his distance to make sure that we could still see and follow him. We finally reached Naruko Onsen, just as the sun was disappearing. Unfortunately, the train had just left, so we had to wait for a little while. We got on a train around 4 PM and returned back to Tokyo. What a day!